Formula 1’s birthday boy and recently-knighted seven-time champion signed a new two-year contract last summer, which kicked in this month, and admitted in September he had considered retirement in the past, noting “there’s other things that I’d like to do, normal stuff I want to do” while reiterating how fortunate he still considers himself to go wheel to wheel every week.

“If I start getting slower, I can’t be bothered to train and I’m not as driven, then I know that’s when I need to stop,” he added.

One thing we know, is he is not getting slower; only Hamilton knows the rest.

Will we be talking about title number eight by birthday number 38 this time next year?

“Adversity causes some to break; others to break records”

Mercedes recently provided the most transparent ‘read between the lines’ wink yet with an image of Hamilton accompanied by the words “Adversity causes some to break; others to break records”.

Hamilton’s brother Nicolas also offered reassurance over Lewis while speaking on his Twitch stream, insisting he was “fine”.

“I think he’s just having a bit of a social media break,” he added. “I don’t blame him, social media can be a very toxic place, but he’s cool though.”

It should be said that silence is no crime, particularly given the manner in which he was denied a record eighth World Drivers’ Championship. Few might have accepted the decision with the class and grace Hamilton did on the day.

“Disillusioned” was how Mercedes team boss Toto Wolff described himself and Hamilton in the aftermath as he questioned the “sporting fairness and authenticity of the sport” in light of a finale his driver referred to as “manipulated”. 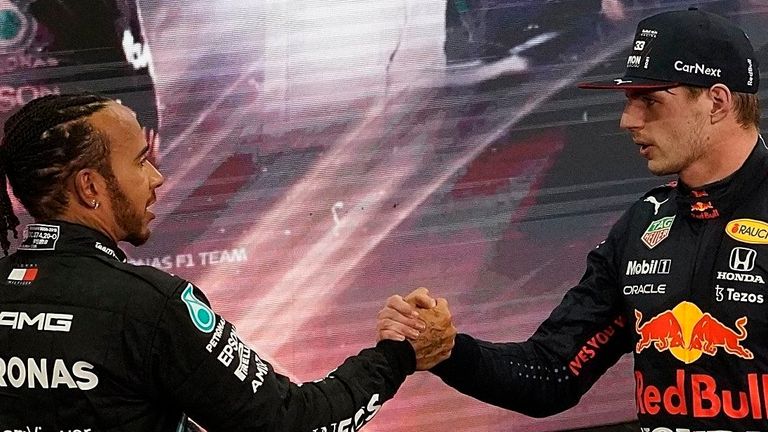 While questions continued to be asked of Hamilton’s status for 2022/23, F1 chiefs have their own progression to address.

“It’s going to take a long time for us to digest what has happened,” said Wolff at the time. “I don’t think we will ever overcome it, that’s not possible.

“And certainly not him [Hamilton] as a driver. I would very much hope the two of us and the rest of the team we can work through the events, but he will never overcome the pain and the distress that was caused on Sunday.

“I would very much hope Lewis continues racing because he is the greatest driver of all time. As a racer his heart will say I need to continue because he’s at the peak of his game. But we have to overcome the pain that was caused upon him on Sunday. He is a man with clear values.”

“Lewis a big part of motorsport”

Newly-elected FIA president Mohammed Ben Sulayem said earlier this month Hamilton had not been replying to his messages after he failed to attend an FIA gala.

He did, however, concede he did not “blame him” and acknowledged the “stress and pressure” Hamilton had been under since the end of the season, with Mercedes having protested the final race’s restart procedure before later distancing itself from a further appeal.

Speaking ahead of the Dakar Rally, Ben Sulayem disagreed with suggestions Hamilton would retire ahead of next season.

“No, I don’t think he will [quit],” he told reporters. “I’ll ask your question, did Lewis declare that he’s not going to race? No. Exactly. Being a driver, you declare yourself, you don’t let the rumours [talk].

“I’m confident that Lewis [will return]. Lewis is a big part of motorsport, and of course of Formula 1, the new era [can add to] Lewis’s wins and achievements, and also Verstappen is there.

“I am very confident that you will see a very challenging Formula 1 season next year.”

The 60-year-old, who was elected as successor to Jean Todt in December, has meanwhile outlined aims to look into F1’s regulations as a means of avoiding a repeat to the conclusion in Abu Dhabi.

“I am going to study the case of what happened in Abu Dhabi, and a decision will be taken how to go forward without any pressure from anyone,” Ben Sulayem said.

“The integrity of the FIA, it is my job and duty to protect it, but it doesn’t mean that we do not look into our regulations, and if there is any improvement [to make], we will.

“I said in my first press conference, this is not the book of God. This is written by humans. It can be improved and changed by humans. So that’s it.”

“Anything is possible as we all know in sport”

Such has been his stamp on the sport that in an era of arguments over varying car strength and intricacies, Hamilton’s skill as a driver continues to reign in the conversation surrounding his supremacy.

This past season marked his eighth in a row with at least eight wins, while his 15 front rows were more than any other driver and his 25 overtakes in Sao Paulo a fitting reference point for one of the great F1 performances.

It’s difficult to imagine him not returning with eyes on title number eight.

“Anything is possible as we all know in sport. We are very emotional characters and tensions run high,” 2009 champion Jenson Button told Sky Sports in December.

“Personally – I don’t know Lewis that well now, I knew him seven or eight years ago – but I wouldn’t see him walking away, especially as he’s just lost the world championship, I think he will come back fighting next year and we’ll be back on, game on in March.”

Hamilton’s former team-mate and rival Nico Rosberg echoed Button, teeing up a classic long-term duel between the Brit and Verstappen.

“It was tough, it was extremely tough,” Rosberg said. “But of course I do count on him being back on the grid next year and fighting to get back that world championship that kind of got taken away from him in a way.

“Lewis used to be, or is, the best wheel-to-wheel racer, and here comes Verstappen who is really taking it to him in wheel-to-wheel racing and sometimes even being better. It’s incredible to see their skill and to watch them go at it. They’re like on their own planet, they are well beyond everybody else, so I do hope we see it again next year.”

The first race of the 2022 F1 campaign takes place in Bahrain on Sunday, March 20 – you can watch the entire season live on Sky Sports!