With his title lead over Lewis Hamilton down to eight points from 21 just over a week ago, Max Verstappen says Red Bull will “just try to be better, and come back strong” for debut event in Jeddah; Outside chance for Verstappen to wrap up title next week to avoid final-round decider

Max Verstappen says Red Bull will focus on trying to come back stronger to hit back against Mercedes at next week’s Saudi Arabian GP after a second successive defeat by Lewis Hamilton.

Meanwhile, the Dutchman said “I never get presents from them” in reference to the stewards after he was handed a five-place grid penalty ahead of Sunday’s race for failing to slow sufficiently for double-waved yellow flags at the end of qualifying.

Impressively recovering to second place in the race behind runaway winner Lewis Hamilton and now holding an advantage of just eight points ahead of his Mercedes driver with 52 to play for over the season’s concluding double-header, Verstappen said: “It’s exciting.

“I would of course have liked to make it a bigger gap, but when you don’t have the pace, it’s impossible to do that, so we’ll just try to be better, and come back strong, especially in Saudi on the street track, and then yeah, we’ll see in Abu Dhabi.”

Paul di Resta was at the SkyPad to analyse why Max Verstappen was handed a five-place grid penalty.

Paul di Resta was at the SkyPad to analyse why Max Verstappen was handed a five-place grid penalty.

Asked how he felt about the penalty, Verstappen told Sky Sports F1: “No surprises there. I knew already last night.

“I never get presents from them so it’s ok.

“But in the end once I knew I was starting seventh I was just very motivated to move ahead and that’s exactly what we did.

“We had a good first lap and then after five laps we were second again. Then I just tried to keep the gap small which we did throughout the whole race so they couldn’t do an extra stop.

“It gave me the fastest lap at the end, so I was definitely happy with that.” 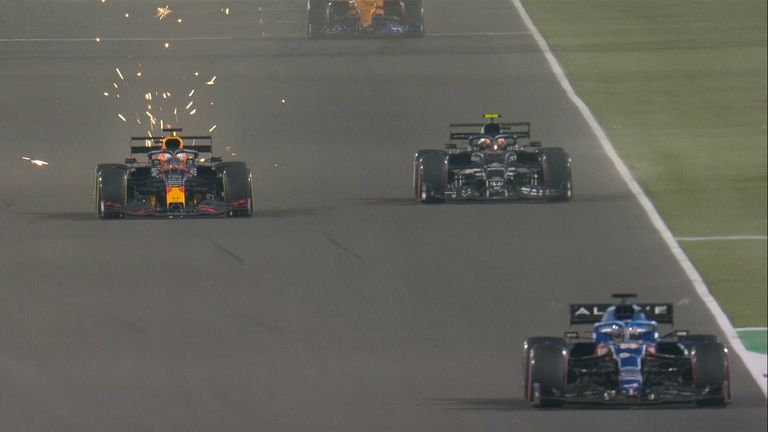 Red Bull’s Max Verstappen overtakes Pierre Gasly for third and then Fernando Alonso for second during the Qatar GP.

Red Bull’s Max Verstappen overtakes Pierre Gasly for third and then Fernando Alonso for second during the Qatar GP.

The extra point Verstappen gained for the race’s fastest lap meant he left Qatar with a slightly larger points lead than he would otherwise have done for just finishing second.

Two to go: How it stands in the title chases

Thanks to that retention of the points lead, Verstappen is already guaranteed whatever happens to at least be in title contention going to the season-ending Abu Dhabi GP on December 12, whereas that is not the case yet definitively for Hamilton.

That is because Verstappen could clinch his maiden title in Saudi Arabia next week, although to do so needs outscore Hamilton by 18 points – something that has only happened once (Monaco) this season.

Meanwhile, the Dutchman also played down the impact the off-track rows between Red Bull and Mercedes could have on his focus on track.

“Racing is not complicated,” he insisted. “It has a brake pedal, a throttle pedal and a steering wheel.

“There is a lot of show around but I think as drivers we know what to do and anything else around it is not really relevant for me. I just really have to focus on my job.”