The University of Hawaiʻi at Mānoa esports program is one of the top 10 best collegiate esports programs in the nation, and it could become No. 1 with the help from the community. The public can vote for UH Mānoa on the Esports Awards website until November 10. The winner, which will be determined by an esports panel of experts (75%) and public vote (25%), will be announced at the Esports Stadium in Arlington, Texas on November 20. UH Mānoa esports representatives have also been invited to attend the in-person ceremony.

UH Mānoa was nominated by its peers across the country as one of 10 finalists for the award. The program has experienced its best year since it began in 2019, earning national recognition for several of its teams, including winning its first collegiate tournament competing in the game Valorant; and becoming the first higher education institution to host Overwatch League regular season tournaments, playoffs and grand finals.

“This past year has really shown that if we can put the resources and Hawaiʻi community behind it, we can really make an impact and showcase that Hawaiʻi esports is not just here to participate but we’re here to do good things for our students,” said Kevin Nguyen, UH Mānoa esports program assistant and spring 2019 communications graduate. 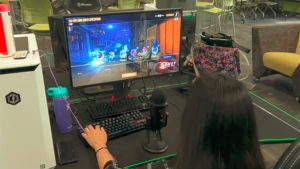 “I’ve been here since the program started back in 2019, and we were just one League of Legends team. We were really trying to figure out how to traverse in this space,” said Kason Padilla, UH Mānoa esports lead project manager and spring 2020 communications graduate. “Now, the program really feels self-sufficient. If me, Kevin (Nguyen) and Sky Kauweloa weren’t around, we really feel like the program would still be running perfectly by itself. We have a solid content team. We can run broadcasts whenever we want. All of our teams have so much interest in them and it’s a well-oiled machine now.”

“Getting to meet the Overwatch League’s amazing professionals was so crazy. It was an opportunity that I think myself and a lot of the other interns didn’t think would ever happen,” said Alohi Tolentino, UH Mānoa marketing student and esports content lead. “Being able to work with these open-minded individuals that were sharing their professional input and advice was really nice. I think the esports industry in Hawaiʻi is relatively new so being able to hear from seasoned professionals in the industry is really exciting because it inspired myself and my colleagues.”

This program is an example of UH Mānoa’s goals of Enhancing Student Success (PDF) and Excellence in Research: Advancing the Research and Creative Work Enterprise (PDF), two of four goals identified in the 2015–25 Strategic Plan (PDF), updated in December 2020.