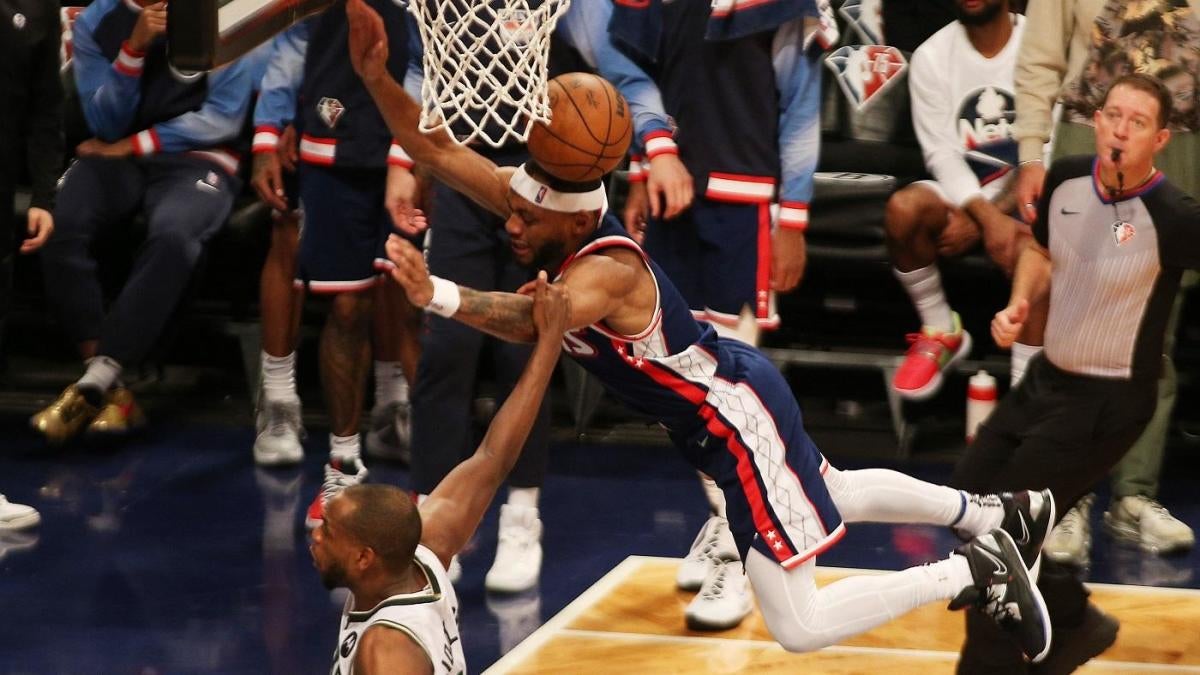 NEW YORK — In the middle of the fourth quarter of the Milwaukee Bucks’ 120-119 overtime win over the Brooklyn Nets on Thursday, an exciting game took a frightening turn when Khris Middleton fouled Bruce Brown on a breakaway dunk. Middleton was assessed a flagrant-2 foul and ejected.

It happened after Giannis Antetokounmpo tried to drop off a pass to Jrue Holiday and Brown stole it, then took off the other way. Brown slowed down, Middleton caught up and Middleton fouled Brown in mid-air. Brown crashed to the ground in dangerous fashion, and, after a replay review, it was ruled a flagrant-2.

“I thought the Middleton play was risky,” Nets coach Steve Nash said. “A guy has left his feet and you’re coming behind; if you grab the arm, that’s a very dangerous play. Unfortunate. I don’t think Khris is a dirty player at all, but that is a dangerous play.”

Brown said he saw Middleton behind him before he took off.

After the foul, Brown remained in the game. He said that he feels “fine” and “just bruised a bone in my wrist.” Asked if it was a basketball play, Brown said, “It’s a hard foul. He wasn’t trying to — I mean, it’s an open dunk. I mean, I wouldn’t do it, but I don’t care. It’s fine.”

Kevin Durant was less diplomatic when it came to the foul that caused his own uncomfortable landing. Late in overtime, the Bucks’ Wesley Matthews fouled Durant on a corner 3, contesting the shot from the side and falling into Durant’s leg. Durant was awarded three free throws, but he said it wasn’t called a flagrant foul

SAN FRANCISCO — Having worked himself into one of the league’s premier role players after going undrafted out of Texas A&M, Alex Caruso recently revealed that the Los Angeles Lakers didn’t exactly work hard to retain him this past offseason, leaving him essentially no choice but to sign a four-year, $37 million contract with the Chicago Bulls.

So far he’s has earned every penny of that contract, and then some, for the 8-4 Bulls. In addition to Chicago fans, one person happy that Caruso no longer plays for the Lakers is Golden State Warriors coach Steve Kerr.

The Warriors used a huge third-quarter run to throttle the Bulls on Friday night, 119-93, in Chicago’s first game this season without All-Star center Nikola Vucevic. But before the game, Kerr showered Caruso with praise when asked about his defense, particularly against Steph Curry.

“Caruso’s great. I was really happy to see him go to the Eastern Conference,” Kerr said. “He’s an excellent defender on and off the ball — tough, smart. Great pickup for the Bulls.”

Our Brad Botkin went into detail about how Caruso has been wreaking havoc on the defensive end so far this season, particularly when paired with Lonzo Ball. NBA matchup data is essentially useless when it comes to Curry, because his off-ball movement necessitates constant defensive switches that defy one-on-one battles, but the eye test shows that Caruso at least gives Curry a hard time, which is all you can really ask against one of the best offensive weapons of all time.

Here’s an example from Friday night, when Curry was attempting to create the last